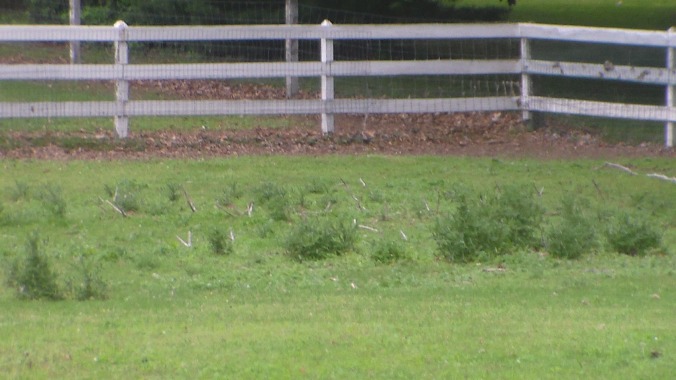 Two years ago we got a strange, little, spiky plant in one of our pastures. At first we didn’t think anything of it, but as it started to grow we took notice.

It had hundreds of extremely spiky needles about one-three inches long. It was only one plant growing up out of the ground like a tree.

The plant grew to be taller than me and quite interesting. We told our lawn-jockeys not to cut it down since it looked kind of pretty.

Eventually dozens and dozens of bright purple flowers bloomed on the plant and it looked beautiful.

Then we noticed that hundreds of honeybees and a few small birds were all pollinating on it, but that our sheep wouldn’t even go near it.

That’s when I realized that this thistle plant was a marvel of evolution. It is designed so scary at large that herbivores (or in this case predators) wouldn’t be able to eat it without hurting themselves. On the other hand the sharp needles gave just enough room for small pollinators to get to the flowers.

I looked up this plant in one of my flora books, and saw it was similar to a milk thistle, although the leaves were slightly different.

By the early fall the flowers had turned to what looked like dandelion fluff and over a few days started to float all around the yard.

The next summer the marvel of evolution came back. What we realized was what that pretty dandelion fluff actually was was seeds. Hundreds and hundreds of seeds floating all over the property.

Our big thistle came back, but so did over a hundred others, all spanning from the pasture to the mailbox at the road, and most of them growing to be human hight.

The sheep had a tough summer of avoiding almost all areas of the field that was now infested with these harmful plants. And harmful they were (I got a couple needles stuck in my feet over a while).

Like the last summer, the plants gave out seeds in extraordinary amounts (another marvel of evolution), but this time the plant was timed by about a hundred. Our yard was overflowing with white fluff. It was everywhere I looked, finding a home for next year.

Now that it’s almost summer, our thistles are starting to come back. I wonder how many blooms we’ll get out of a hundred plant’s seeds.

2 thoughts on “Thistles all over”

Stone post farm is a five-acre historical homestead on the Connecticut river.

The house was built in 1745 and the property consists of a three-stall barn, two de-tatched garages, an outhouse, a yard, a vegetable garden,  a flower garden, two pastures, two and a half acres of woods, a brook, and an old well house.